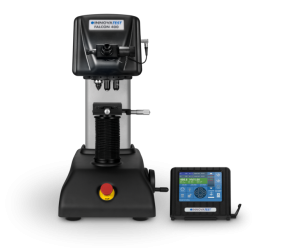 There are various hardness testers available based on specifications and abilities. Although they both do the same work, the variation in stature and composition give each brand an edge over the other. The choice in hardness testing varies based on the methodology.

Vickers uses a diamond pyramid indention to test hardness. It measures hardness through the ability of the material to resist deformation. The impressions produced by the indention determines the resistance level of the material, which measures the hardness level. Examples of Vicker hardness testing machines include Falcon 400, 450, 500, 600 and 5000.

It uses a round pointed indention to measure material hardness, especially metals. People prefer it since it gives the hardness faster, accurately and only needs a small sample of the material. Rockwell testers include the Fenix 200 AR, 200 ACL and 200 DCL. The 300 series includes the RS, RS-IMP, U and XL.

It is the oldest of the hardness testers and was used in determining castings and forging hardness. Hardness is determined by the ball size and the test force in relation to the material’s dimension and design. Brinell Nexus series include the 3100, 3200, 3001 XLM-IMP, 3300 and the 3400.

The diagonals on the Knoop tester test hardness over relatively smaller distances compared to the other methods. Its hardness measurements vary based on hardness values (200gf and below), bulkiness (500 gf) and test force (above 1000 gf.)